Alumni » Alumni of the Quarter

Alumni of the Quarter 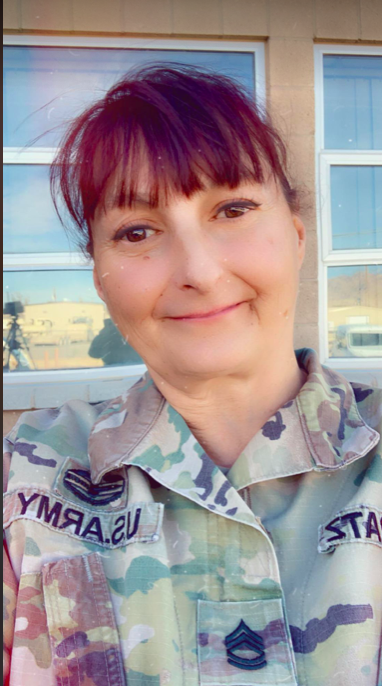 I am Christine Froncak-Pongratz, a Sergeant First Class (E-7) in the United States Army.  My former name is Christine Clabaugh (as I was known at St. Hedwig Catholic School). Many ask me why I do not use my “Froncak” (my married” name) but that is because I have made my name in the U.S. Army as SFC “P” (SFC Pongratz) and will use this name until I retire. I have made my name and my success under this name.

I am a five-time combat veteran. My first deployment occurred in October 2001 (19 days after 9-11). 9/11 was ONE of the hardest days of my life. I remember each and every moment that day.  I was changing my 9 month old daughter’s diaper and watching (on the news) the 2nd plane hit the towers. More specifically, I remember my son (6 years old) grabbing my leg, and saying “Mommy, does this mean you have to leave”? 19 days later, I deployed…  I have been stationed overseas including 3 deployments to Iraq and 2 deployments to Afghanistan). I have been all over the world. Ireland, Germany, Hungary and of course stateside, in Washington, Alabama, South Dakota, Wisconsin and California.

I joined the United States Army right out of high school. In high school, I knew what I wanted in my future, but I did not know how to get there, I knew that at that point, everyone thought of me as a freak and would not amount to much.

I grew up in Los Alamitos, CA and lived in Rossmoor, CA which is what most knew of a higher society neighborhood however, my family struggled as so many did. I grew up with my grandparents (I was adopted, along with my sister). I remember being teased because my parents were different (older) but they were MY PARENTS and the only parents that my sister and I knew. They did the best they could and gave us the best life that they could. Everyone in my family (including both my birth parents) were prior military. My hero in my life growing up was my brother David. HE WAS MY ULTIMATE HERO and he is the only one in my life that I ever strived to make proud and earn his approval. He was paralyzed (a quadriplegic) from the neck down at the age of 17 years when he was in the Marine Corps and as he struggled and went through life, he taught me the most important lesson in life…”EVERYTHING HAPPENS FOR A REASON…God has a plan for you, and like it or not, your future is written”. This became my life motto and still is to this day.

I joined the military, the United States Army as a fifth generation military and wanted to prove to everyone that I could be a success and 24 years later.  I AM AND I HAVE!

I am a so very proud mother of two absolutely wonderful children. Tyler is 25, a Marine, married to a wonderful woman, Rachelle and have rainbow baby son, Riley.  Emily, my daughter and my youngest, is also married to a United States Army Soldier. My every prayer and dream has come true that I would have successful and healthy children that carry on my family legacy.

St. Hedwig’s grounded me as person. I went to St. Hedwig from 1st grade through 8th grade (and yes, I remember all eight of my teachers, Mrs. Hanson, Sister Mary, Mrs. Fields, Mrs. Crowder, Mrs. Vitali, Mr. Zahn, Mrs. Whitmore, and Mrs. Barnes). St. Hedwig formed and created my belief in God and guided me during the most tough, heart-broken, down-and-out, and even proudest moments of my life. While my time at St. Hedwig’s gave me my foundation for spiritual guidance and need the need for console, it was also the most difficult time of my life as a child that I never spoke of. As I grew up, I, of course, learned and grew-up and formed my own life of sorts, it was St. Hedwig’s that gave me my love of and knowledge of God. That never EVER left me and throughout the years, the knowledge and love of God has only grown more.

Were there were there times I questioned God’s intentions. Of course! I believe everyone has that at some point and time in their life. Losing my Dad and my mom (Grandma & Grandpa) was hard, but losing my brother David, was the most so much harder. Losing my comrades, my Battles, and my friends at war in indescribable ways to die was the most challenging time of my faith. The words of …”EVERYTHING HAPPENS FOR A REASON…God has a plan for you, and like it or not, your future is written” still remains in my heart and my belief in God and always will.

If you would like to nominate someone to be our next Alumni of the Quarter, click here to fill out the nomination form!