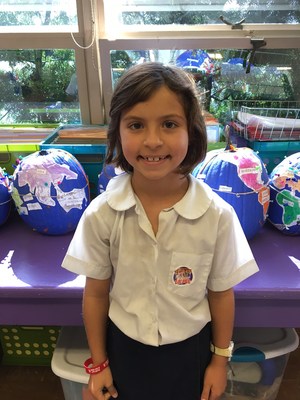 Check out Room 3A’s pumpkin globes! On day one of this project, students painted their pumpkins, and colored the seven continents. On day two, students cut out their continents, and assembled their “globes.” They then worked together to label all oceans, continents, the Equator and Prime Meridian. On day three, students used push pins to locate different countries and cities on their globes! Nice globes, 3A!

For Social Studies, we had to make a globe pumpkin. First, we painted them blue. Then, we colored the continents. After that, we labeled the continents and the oceans. We also put push pins in the pumpkins as Mrs. Fischer called out different countries and cities. Next, we labeled the equator and prime meridian with yarn. There were six groups with four people in each group. In my group, the people were Kai, Delyle, and Ella. It was so much fun! You would have loved it! Even my older siblings said they would have liked it. It was a blast making globe pumpkins!